Last year, Americans learned two of the nation’s largest surveillance agencies repeatedly violated the law and related court orders despite training on the procedures set up to protect the privacy of U.S. persons.After months of stonewalling, one of those agencies has agreed to hand over documents relating to how the other agency illegal spied on thousands of people.

The FBI flouted the law and the National Security Agency ignored a rule to safeguard civil liberties when these agencies gathered or searched emails and other communications gathered from U.S. tech and phone companies, under a statute designed to produce foreign intelligence, ruled Judge James E. Boasberg, presiding judge of the Foreign Intelligence Surveillance Court, in an opinion made public in September of 2020.

“It should be unnecessary to state that government officials are not free to decide for themselves whether or to what extent they should comply with court orders,” Boasberg wrote in the December 2019 opinion.

Perhaps the most startling example of illegal snooping cited in the ruling was the FBI’s a batch query of 16,000 people — the size of a small town — only seven of whom had an apparent link to criminal activity or foreign intelligence information. Some were U.S. citizens, though it is not known how many. The court did not say what the search was for.

The FBI maintained that the queries for all 16,000 people were reasonably likely to return foreign intelligence or evidence of a crime. But Judge Boasberg described that claim as “unsupportable.” He lambasted the bureau, writing that apart from seven people, there was “no indication” that the remaining thousands were involved in any criminal activity or foreign spy work.

The judge found the FBI had no reason to believe that running quires would return any foreign -intelligence information or evidence of a crime.

After months of stonewalling, the NSA has agreed to release documents related to the batch query of the 16,000, attorney Ty Clevenger announced.

Clevenger made a FOIA request on March of 2020, which the NSA initially denied. But on appeal, the spy agency said it will grant the release of “all documents, records, and other tangible evidence reflecting improper surveillance of 16,000 individuals…”

Buckle up, kids. The National Security Agency has agreed to produce records about the FBI’s illegal snooping on 16,000 Americans, according to a letter that I received from the NSA this afternoon, and that suggests a political fight between the two agencies.

The NSA replied to the exact same request Clevenger provided to the FBI where he received the response it would take the FBI decades to respond. Below is the NSA’s letter:   Tweet  Source FISA-Court-Opinion-on-Government-Compliance-with-Section-702-Surveillance-Law 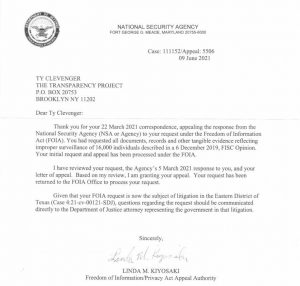