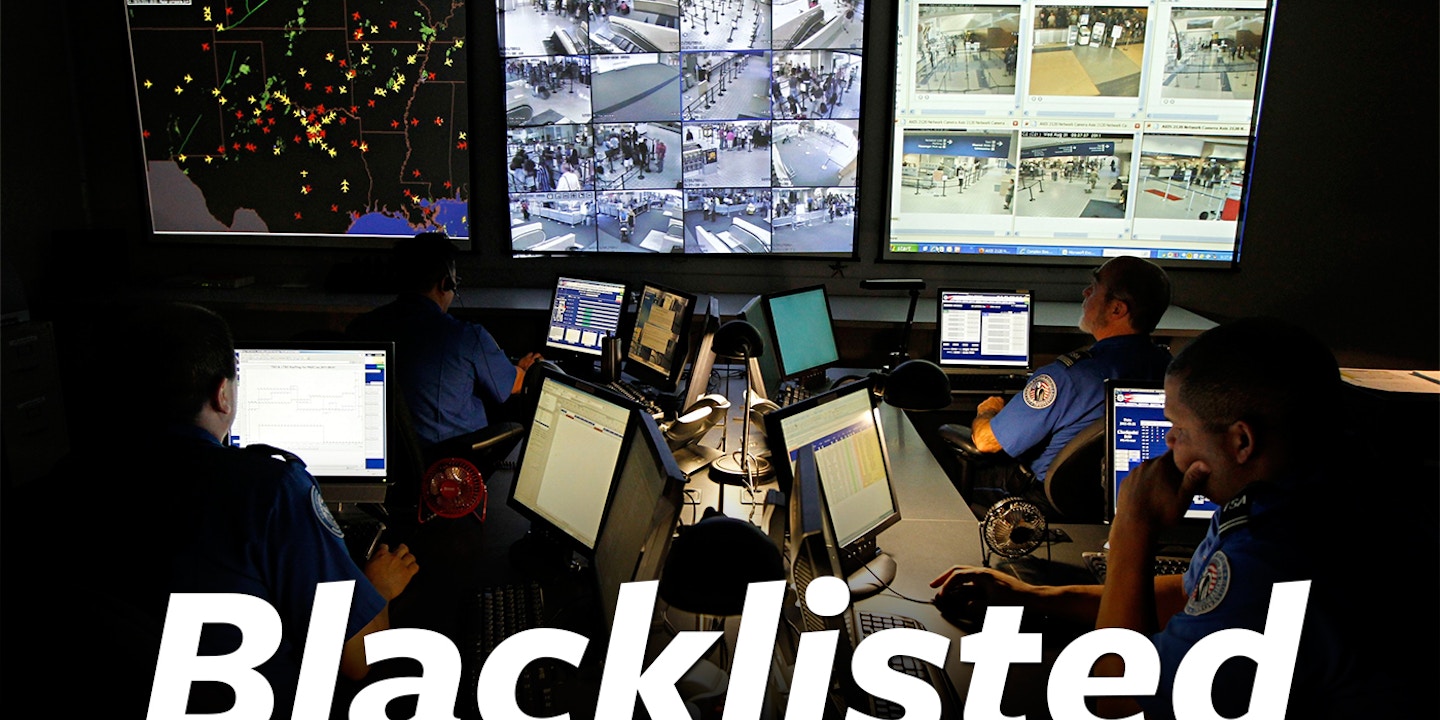 Jeremy Scahill, Ryan Devereaux
July 23 2014, 12:45 p.m.
JUSTICE TI NOTES: What I find interesting is the dates of this that came into play is after i had already witness Obama, Beyonce and Rihanna targeting me and organized gang stalking me.  However I fly freely and have had passports repeatedly stolen and replaced by the United States government.  So am I not blacklisted, well for sure Im not a terrorist.

The Obama administration has quietly approved a substantial expansion of the terrorist watchlist system, authorizing a secret process that requires neither “concrete facts” nor “irrefutable evidence” to designate an American or foreigner as a terrorist, according to a key government document obtained by The Intercept.

The “March 2013 Watchlisting Guidance,” a 166-page document issued last year by the National Counterterrorism Center, spells out the government’s secret rules for putting individuals on its main terrorist database, as well as the no fly list and the selectee list, which triggers enhanced screening at airports and border crossings. The new guidelines allow individuals to be designated as representatives of terror organizations without any evidence they are actually connected to such organizations, and it gives a single White House official the unilateral authority to place entire “categories” of people the government is tracking onto the no fly and selectee lists. It broadens the authority of government officials to “nominate” people to the watchlists based on what is vaguely described as “fragmentary information.” It also allows for dead people to be watchlisted.

Over the years, the Obama and Bush Administrations have fiercely resisted disclosing the criteria for placing names on the databases—though the guidelines are officially labeled as unclassified. In May, Attorney General Eric Holder even invoked the state secrets privilege to prevent watchlisting guidelines from being disclosed in litigation launched by an American who was on the no fly list. In an affidavit, Holder called them a “clear roadmap” to the government’s terrorist-tracking apparatus, adding: “The Watchlisting Guidance, although unclassified, contains national security information that, if disclosed … could cause significant harm to national security.” 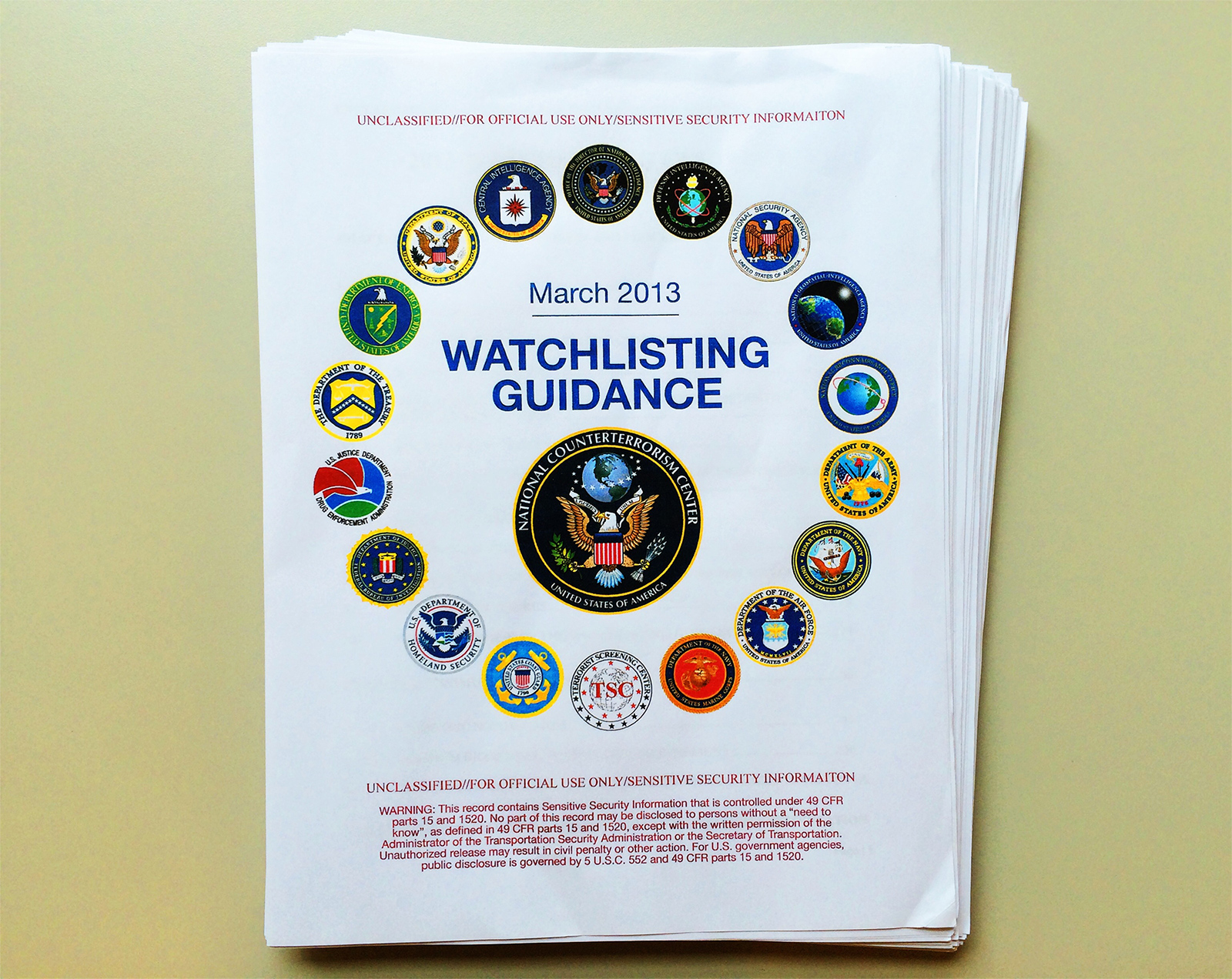 The rulebook, which The Intercept is publishing in full, was developed behind closed doors by representatives of the nation’s intelligence, military, and law-enforcement establishment, including the Pentagon, CIA, NSA, and FBI. Emblazoned with the crests of 19 agencies, it offers the most complete and revealing look into the secret history of the government’s terror list policies to date. It reveals a confounding and convoluted system filled with exceptions to its own rules, and it relies on the elastic concept of “reasonable suspicion” as a standard for determining whether someone is a possible threat. Because the government tracks “suspected terrorists” as well as “known terrorists,” individuals can be watchlisted if they are suspected of being a suspected terrorist, or if they are suspected of associating with people who are suspected of terrorism activity.

“Instead of a watchlist limited to actual, known terrorists, the government has built a vast system based on the unproven and flawed premise that it can predict if a person will commit a terrorist act in the future,” says Hina Shamsi, the head of the ACLU’s National Security Project. “On that dangerous theory, the government is secretly blacklisting people as suspected terrorists and giving them the impossible task of proving themselves innocent of a threat they haven’t carried out.” Shamsi, who reviewed the document, added, “These criteria should never have been kept secret.”

The document’s definition of “terrorist” activity includes actions that fall far short of bombing or hijacking. In addition to expected crimes, such as assassination or hostage-taking, the guidelines also define destruction of government property and damaging computers used by financial institutions as activities meriting placement on a list. They also define as terrorism any act that is “dangerous” to property and intended to influence government policy through intimidation.

This combination—a broad definition of what constitutes terrorism and a low threshold for designating someone a terrorist—opens the way to ensnaring innocent people in secret government dragnets. It can also be counterproductive. When resources are devoted to tracking people who are not genuine risks to national security, the actual threats get fewer resources—and might go unnoticed.

“If reasonable suspicion is the only standard you need to label somebody, then it’s a slippery slope we’re sliding down here, because then you can label anybody anything,” says David Gomez, a former senior FBI special agent with experience running high-profile terrorism investigations. “Because you appear on a telephone list of somebody doesn’t make you a terrorist. That’s the kind of information that gets put in there.”

The fallout is personal too. There are severe consequences for people unfairly labeled a terrorist by the U.S. government, which shares its watchlist data with local law enforcement, foreign governments, and “private entities.” Once the U.S. government secretly labels you a terrorist or terrorist suspect, other institutions tend to treat you as one. It can become difficult to get a job (or simply to stay out of jail). It can become burdensome—or impossible—to travel. And routine encounters with law enforcement can turn into ordeals. 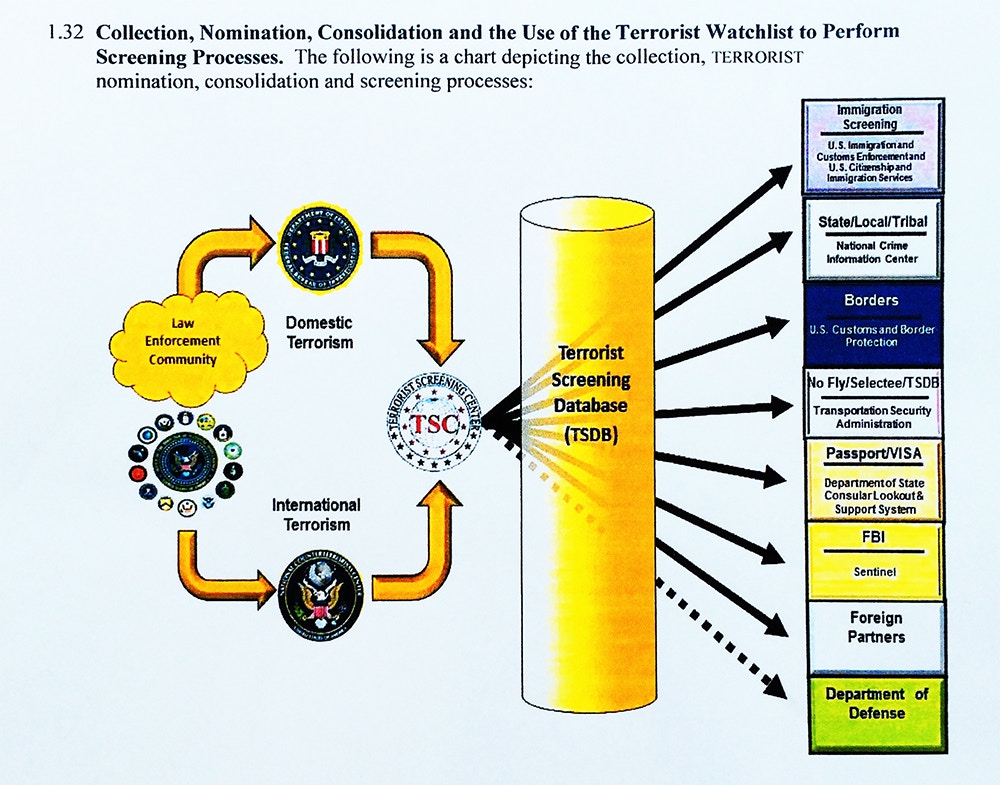 A chart from the “March 2013 Watchlisting Guidance”

Until 2001, the government did not prioritize building a watchlist system. On 9/11, the government’s list of people barred from flying included just 16 names. Today, the no fly list has swelled to tens of thousands of “known or suspected terrorists” (the guidelines refer to them as KSTs). The selectee list subjects people to extra scrutiny and questioning at airports and border crossings. The government has created several other databases, too. The largest is the Terrorist Identities Datamart Environment (TIDE), which gathers terrorism information from sensitive military and intelligence sources around the world. Because it contains classified information that cannot be widely distributed, there is yet another list, the Terrorist Screening Database, or TSDB, which has been stripped of TIDE’s classified data so that it can be shared. When government officials refer to “the watchlist,” they are typically referring to the TSDB. (TIDE is the responsibility of the National Counterterrorism Center; the TSDB is managed by the Terrorist Screening Center at the FBI.)

In a statement, a spokesman for the National Counterterrorism Center told The Intercept that “the watchlisting system is an important part of our layered defense to protect the United States against future terrorist attacks” and that “watchlisting continues to mature to meet an evolving, diffuse threat.” He added that U.S. citizens are afforded extra protections to guard against improper listing, and that no one can be placed on a list solely for activities protected by the First Amendment. A representative of the Terrorist Screening Center did not respond to a request for comment.

The system has been criticized for years. In 2004, Sen. Ted Kennedy complained that he was barred from boarding flights on five separate occasions because his name resembled the alias of a suspected terrorist. Two years later, CBS News obtained a copy of the no fly list and reported that it included Bolivian president Evo Morales and Lebanese parliament head Nabih Berri. One of the watchlists snared Mikey Hicks, a Cub Scout who got his first of many airport pat-downs at age two. In 2007, the Justice Department’s inspector general issued a scathing report identifying “significant weaknesses” in the system. And in 2009, after a Nigerian terrorist was able to board a passenger flight to Detroit and nearly detonated a bomb sewn into his underwear despite his name having been placed on the TIDE list, President Obama admitted that there had been a “systemic failure.”

Obama hoped that his response to the “underwear bomber” would be a turning point. In 2010, he gave increased powers and responsibilities to the agencies that nominate individuals to the lists, placing pressure on them to add names. His administration also issued a set of new guidelines for the watchlists. Problems persisted, however. In 2012, the U.S. Government Accountability Office published a report that bluntly noted there was no agency responsible for figuring out “whether watchlist-related screening or vetting is achieving intended results.” The guidelines were revised and expanded in 2013—and a source within the intelligence community subsequently provided a copy to The Intercept.

“Concrete facts are not necessary”

The heart of the document revolves around the rules for placing individuals on a watchlist. “All executive departments and agencies,” the document says, are responsible for collecting and sharing information on terrorist suspects with the National Counterterrorism Center. It sets a low standard—”reasonable suspicion“—for placing names on the watchlists, and offers a multitude of vague, confusing, or contradictory instructions for gauging it. In the chapter on “Minimum Substantive Derogatory Criteria”—even the title is hard to digest—the key sentence on reasonable suspicion offers little clarity:

“To meet the REASONABLE SUSPICION standard, the NOMINATOR, based on the totality of the circumstances, must rely upon articulable intelligence or information which, taken together with rational inferences from those facts, reasonably warrants a determination that an individual is known or suspected to be or has been knowingly engaged in conduct constituting, in preparation for, in aid of, or related to TERRORISM and/or TERRORIST ACTIVITIES.”

The rulebook makes no effort to define an essential phrase in the passage—”articulable intelligence or information.” After stressing that hunches are not reasonable suspicion and that “there must be an objective factual basis” for labeling someone a terrorist, it goes on to state that no actual facts are required:

“In determining whether a REASONABLE SUSPICION exists, due weight should be given to the specific reasonable inferences that a NOMINATOR is entitled to draw from the facts in light of his/her experience and not on unfounded suspicions or hunches. Although irrefutable evidence or concrete facts are not necessary, to be reasonable, suspicion should be as clear and as fully developed as circumstances permit.”

While the guidelines nominally prohibit nominations based on unreliable information, they explicitly regard “uncorroborated” Facebook or Twitter posts as sufficient grounds for putting an individual on one of the watchlists. “Single source information,” the guidelines state, “including but not limited to ‘walk-in,’ ‘write-in,’ or postings on social media sites, however, should not automatically be discounted … the NOMINATING AGENCY should evaluate the credibility of the source, as well as the nature and specificity of the information, and nominate even if that source is uncorroborated.”

There are a number of loopholes for putting people onto the watchlists even if reasonable suspicion cannot be met.

One is clearly defined: The immediate family of suspected terrorists—their spouses, children, parents, or siblings—may be watchlisted without any suspicion that they themselves are engaged in terrorist activity. But another loophole is quite broad—”associates” who have a defined relationship with a suspected terrorist, but whose involvement in terrorist activity is not known. A third loophole is broader still—individuals with “a possible nexus” to terrorism, but for whom there is not enough “derogatory information” to meet the reasonable suspicion standard.

Americans and foreigners can be nominated for the watchlists if they are associated with a terrorist group, even if that group has not been designated as a terrorist organization by the U.S. government. They can also be treated as “representatives” of a terrorist group even if they have “neither membership in nor association with the organization.” The guidelines do helpfully note that certain associations, such as providing janitorial services or delivering packages, are not grounds for being watchlisted.

The nomination system appears to lack meaningful checks and balances. Although government officials have repeatedly said there is a rigorous process for making sure no one is unfairly placed in the databases, the guidelines acknowledge that all nominations of “known terrorists” are considered justified unless the National Counterterrorism Center has evidence to the contrary. In a recent court filing, the government disclosed that there were 468,749 KST nominations in 2013, of which only 4,915 were rejected–a rate of about one percent. The rulebook appears to invert the legal principle of due process, defining nominations as “presumptively valid.”